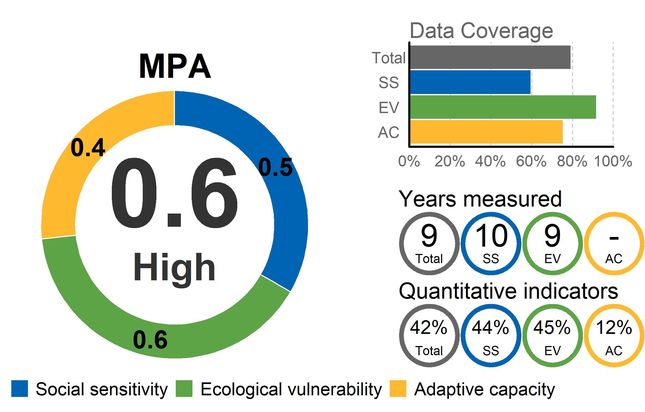 During the last year and in the framework of the MPA Engage Interreg-MED project, the University of VIGO (UVIGO) developed a methodology for designing and implementing a Social-ecological Vulnerability Assessment to the projected impacts of climate change in Marine Protected Areas (MPAs) in the Mediterranean.

The tool is designed to support managers with a useful instrument for the management and the interpretation of the vulnerability of the MPA and its species, habitats, and user groups to climate change expected impacts in 2050 and 2100. UVIGO developed an interactive tool in the form of an app for the calculation and illustration of the Vulnerability Indices at the MPA level. A preliminary version of the tool was presented to the project partners in November 2020, and the process continued over the following months with a testing phase during which the team worked in collaboration with the Partners for its improvement.

The methodology is replicable and transferable since the MPA managers can follow a series of fixed steps to gather information on the social, ecologic, and economic indicators that build up the index. Entering the data of their indicator values to the tool, the MPAs can quickly get scores in terms of ecological and social-ecological vulnerability, the vulnerability of habitats, species and user groups included in the assessment.

More information about the Vulnerability Assessment tool will be provided when the final version of the tool is lunched.

All news
Back to top